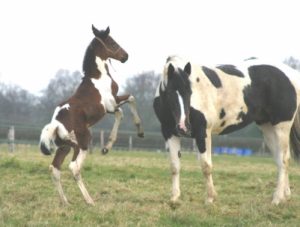 Castration is an elective surgery that has been performed on colts from less than one week old to aged stallions. Most horsemen now prefer to geld colts prior to puberty, which can arrive quite early in some horses. Local and general anesthesia are used and post operative pain relievers are often administered. Aftercare includes 24 hours of postoperative stall rest followed by twice daily sessions of brisk exercise to control swelling and stiffness. The surgical site is normally well healed at three to six weeks and testosterone levels are very low by nine weeks.

Geldings are the preferred saddle horse for many riders because of the steadiness and tractability that comes when they are relieved from the reproductive behavior typical of most stallions.

After a physical exam, this surgery can generally be performed on site. The preferred season in Arizona is October to April. If you have a weanling or yearling colt, consider this surgery prior to summer.

Accessibility by WAH
Call Us After Hours Emergency